Seeing a Live Taping of the Colbert Report on Election Night

This week was chock full of adventures for Brandon and I but the real highlight had to have been Election Night.  As I mentioned in an earlier post it was also Brandon’s 30th birthday and I was lucky enough to score a pair of tickets to see the Colbert Report live that night.

In all honesty I didn’t realize Brandon’s birthday coincided with Election Day.  I thought Election Day was on the 9th or 10th of November.  I remember signing up for tickets for the show and then being completely bummed when I found out that the taping was live and we would have to be in NYC until after midnight.  I wondered how we would manage to stay up that late (NYC is 3 hours away from us) and assumed it would mean taking two days off work.  I called Brandon to tell him that while I scored the tickets to the show, they were for a live taping at 11:30 pm.  That’s when he let me in on the little secret.

Well that just changed the whole game around!

Learning that the show would be on Election Night meant that there had to be a special guest or some kind of big thing they had planned.  I knew I should do everything in my power to be in NYC for that.  So Brandon requested leave and I moved around my work schedule so that I would work 6-3:30 on Tuesday and 9-5:30 on Wednesday.  It meant only getting a few hours of sleep that night but I felt it would be worth it.

And it totally was.

We arrived in Grand Central Station around 7 pm.  It was a 1.6 mile walk to the studio and since we didn’t have to be in line till 9:30 we decided to walk.  We ended up going through Times Square where all the big screens were lit up with news coverage of the election.  There were reporters on almost every corner who were stopping people and asking them whether they voted and which state they voted in.  The reporters were looking for voters from big swing states like Ohio but Brandon and I were registered Washington voters so nobody was interested in talking to us. 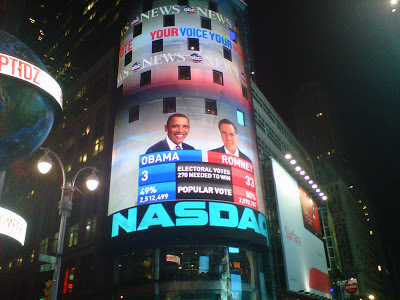 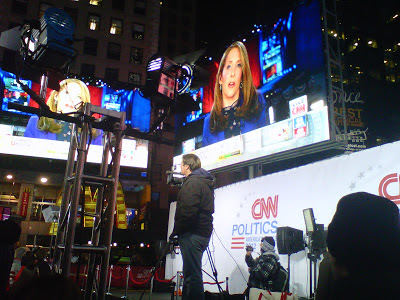 We hung around in Times Square for a bit before continuing our journey toward 54th street.  We finally got to the studio at around 8:15 pm and were surprised to see a number of people already lined up outside. It felt like we were showing up at Kohl’s on the morning of Black Friday.  The show didn’t start till 11:30 but we found out that the first ticket holders got in line at 6.  They checked our names on the list of ticket holders as well as our ID’s and we got in line to wait.  During that time we chatted with dozens of people in the line.  That’s what I love so much about NYC, you can talk to just about anybody.

At around 9:30 the security guy comes out and gives us the lowdown of how the security check is going to go.  It’s pretty much like airport security, they check your bags and you go through a metal detector.  Then he asked for the military members to please step up to the front.  Brandon and I went up there and the guy asked Brandon a few questions about his service.  Then he said that he wanted to remember Brandon’s face for the show.

I started thinking Holy crap we’re going to be on live TV.

Brandon was much more relaxed than that and insisted it meant nothing.  Still, I decided to put on some lipstick.  You know, just in case.  So finally at around 10 the line starts moving through security.  When Brandon and I get to the front the security guy hands Brandon a red card and tells us to come up to the front when he asks for the red card holders.  After security the audience ends up in a large waiting area.  There’s no place to sit down but at least it’s inside where it’s warm.  There’s a TV that plays old reruns of the Colbert Report and we continue to wait, wait, wait.  I didn’t realize how much waiting we would be doing for all this.

FINALLY it was time go in and get seated!!!  But first, we all had to turn off our phones.  No biggie, mine had died a long time ago and my new friends were keeping me up to date on the election.  But they were serious about the turning off of the phones.  Everyone had to show proof that their phones were off before being allowed in.  A little weird but like I said, I didn’t care.

So all the red card holders were allowed to go in first.  At this point I found out that holding a red card meant getting VIP seating in the audience.  Brandon and I were seated in the third row.  I was a little bummed that we didn’t get to sit in the front row but our seats were still great.

After everyone was seated they brought out a stand-up comedian to get us laughing and jovial.  It worked cause the guy they had was really really good.  We asked him for updates on the election but he remained mum and then we all realized why they had us turn off our phones.  The producers wanted us in the dark so that when Stephen announced who the projected winner was it would be a surprise for all of us.

So the comedian finishes up his gig and then introduces Stephen.  He came out to talk with us before the show and have a little Q&A session where we could ask him anything…within reason of course.  And here comes the best part of the evening…

I got to ask Stephen Colbert a question.

He looked at me when I raised my hand and picked ME to ask a question!  The question I wanted to know was “Did you really play a role as an elf in the upcoming Hobbit movie?”

Of course Stephen would neither confirm nor deny this rumor.  But what he did say was that the week he spent in New Zealand was the best week of his entire life and then ended his response to me with a long saying in Tolkien’s Elvish language which nobody understood except for one other extreme Tolkien nerd sitting in the audience.

From beginning to end the show was fantastic (you can watch the full episode here).  I was hoarse from screaming so much and my hands ached after half an hour of hard clapping but I didn’t care.  It was epic, a night we will never ever forget.  Some people say that meeting a celebrity in person is a bit of a let-down because sometimes a person seems great on TV but then acts like a complete asshole in real life.

I can say without a doubt that Stephen Colbert was every bit as awesome as I hoped he would be.

After the show was over we once again hiked back to Grand Central Station, stopping through Times Square to check out the breakdown of the election by state.  We chatted with a few locals while people all around us were celebrating Obama’s re-election, shouting from taxi cabs and limousines.  It was so incredible to be in Times Square during such an important event, especially because this was our first time voting.

That’s right, up until this election Brandon and I were both voter virgins.

There’s many reasons we never bothered to vote but this time around we decided we really needed to be more aware of what’s going on in politics so we made it a point to do our research about candidates and take the time to register to vote.  I’m so very glad we did.

The Verdict:  Tickets were free so the only cost for us to go was the round-trip metro tickets and a quick dinner at McDonald’s.  The only downside was my lack of sleep during the night.  We didn’t get home till 4 am and I was at work by 9 am.

How to Get Tickets:  Every few weeks the Colbert Report will announce ticket availability.  They’re free but they also run out very very quickly.  I got the notice on Facebook during a time I was unemployed so I just happened to be in the right place at the right time.  When tickets are announced they’re done for a full week of shows and all the tickets for that week usually sell out within an hour or two.  It’s really all about being patient and determined.  You can also stop by the studio to get stand-by tickets for that day though there’s no guarantee you’ll get in.

Child Friendly?  I would say no.  Our live taping was at 11:30 at night and even though the recorded shows are in the afternoon I would not suggest bringing your kids.

Spending the Day at Mystic Aquarium in Mystic, CT

This site uses Akismet to reduce spam. Learn how your comment data is processed.

Hi there, I’m Christa! I’m a travel blogger living in Virginia with my husband and young daughter. Together we travel the world, treating every day like it's a new adventure.